Photographic works by Sheila Ter Meer of Clay County will be featured in a solo exhibit throughout August in Covered Bridge Art Association’s Gallery at Rockville.

The Brazil native is a member of River City Art Association and Arts Illiana in Terre Haute, and an associate member of Covered Bridge Art Association. She was awarded the opportunity to showcase her photography in the Gallery as Best of Show winner in the July 2014 CBAA Associate Members Show.

Ter Meer is a self-taught photographer; some of her news and feature photos have been published in the Terre Haute Tribune-Star where she has worked in the features/community news department since 1981.

Until January 2013, photography was just a hobby she shared only with family and friends and in Open Class competitions at the Clay County 4-H Fair.

Autumn Haze from the Fall Out of Focus Series by Todd Stokes of Terre Haute, Indiana

River City Art Association vice president Todd Stokes received a First Place and an Honorable Mention for his entries in the 2015 Annual Midwest Photography Show in the Bicentennial Art Center at Paris, Ill. 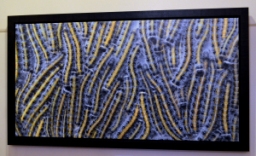 Boshart will give a talk about the…

Take Life to the Matte ©

Photography is my passion. My Photolosophy© reveals more about me than words could say.